More Pixelated Martini Roller game stuff (other posts)... I just pulled everything off my camera and noticed this video showing the collision system in progress:
Collision system in progress
(a final video can be found here)
I figured I'd briefly write up what we decided to do for the collision / physics. Nolan had already put together some simple gameplay motion. We used Aristotelian physics: objects are at rest unless something actively disturbs them. AKA apply velocity only, not acceleration. Well, some velocity is recycled frame to frame... but, that not what I really was going to talk about. That would be collision:

We wanted:
We really only considered
We ended up with colliding against images because it greatly simplified art workflow (just paint a version of the sprite with what you wanted to be solid), would allow for pretty complicated shapes, and I figured the code may be easier.

Nolan and I pair programmed it at the end of the day Saturday, good thing too, we were both getting tired. Here's what we did:
Overall I think the system worked out pretty well. It was very easy to make art. The gameplay felt pretty good. It was fairly quick to code. It was pretty robust, even when nasty shapes.

Downsides: The olive was overly sticky to some surfaces, you can crawl around objects sometimes a bit before falling off. That was related to us basically turning gravity way down if you're already sitting on a surface. Without doing that you couldn't roll around as freely as we liked.

Note: Noland replied to this post --- check out the comments

Code from the above, if you're into that:

Triangle Game Jam, It's Over! 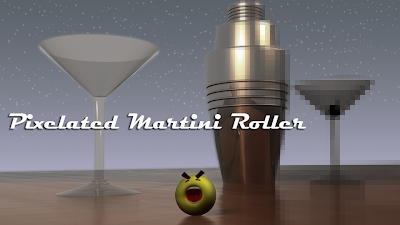 Nicer videos and reports will come later I'm sure [EDIT: Here is high quality video], but for now here's a handheld video of the Pixelated Martini Roller when we ran out of time:


You're an olive. You like martinis. You roll around and get to umbrellas for checkpoints. Sitting in a martini glass gets you a bit tipsy. You've got more energy and can jump higher. But watch out, stay too long and you get sloppy. You'll stagger around, and your jumps won't land you where you want to go.
As you get tipsy the screen gets pixelated (hard to see in this video), and the music sounds like it's had too much to drink too (hard to hear in this video).
Thanks for everyone at the Jam for a good time. Thanks for Michael Noland and Adrienne Walker for working together on this game with me, and Brad for the title screen.
(music by STU, 8bitpeople.com, MyMelody, Creative Commons attribution license) 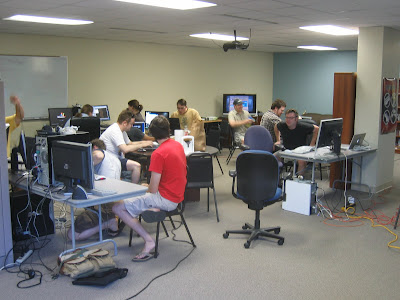 But, you've also got to check out the progress on Musical Dragon Twirler:


Getting sleepy now....
No comments:


Mike had the idea to cut up shapes and try to score the result based on how nice of a triangle it was. We decided that the size of the triangle shouldn't matter, just how close it was to an equilateral triangle. Mike wrote some scoring code for triangle shapes, and I wrote a definition of n-gons and code to cut them. We decided to always have convex shapes.

Things turned out well, Mike made some procedural level generation code with different shape size, irregularity complexity, and speeds. I dressed up the graphics a bit, worked on the code for cutting and movement, etc.

We added special bonus rounds as well, so gamplay alternates between levels with moving random pieces, and bonus rounds with shapes that start off still. Your job is to quickly decide how to cut and collect as many triangles as possible in a limited amount of time.

The game turned out to be pretty fun, and we had a good difficulty curve over the duration of several levels. The final stage is quite challenging, and the last bonus stage is a rare treat. ;)

Since the first game jam, spending a lot of energy getting used to XNA and C#, we've gotten faster and continued to use XNA.
1 comment: