A Weak Smart Pointer, or a Smart Weak Pointer 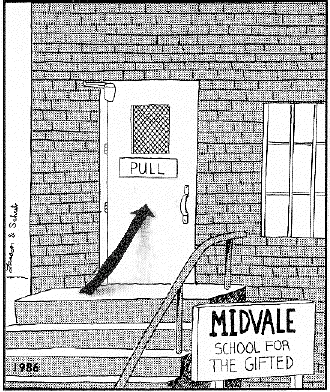 Smart pointers simplify many lifetime management scenarios, especially when designing modular components and systems with a multitude of lifetime dependency options available to final applications. Weak pointers are also useful, but are flawed in a multithreaded environment.

The other day a hybrid smart/weak pointer occurred to me, I'll present it here.

A refresher:
Discussion:
Smart pointers are sometimes used for code safety, even when a system does not desire lifetime management responsibility. Weak pointers are a better solution here, allowing a system to keep a reference that will go NULL when the object dies.

One work around is to use a short lived smart pointer, which will keep the dynamic object alive from the weak pointer dereference until work is complete. This requires a smart and weak pointer pair implementation designed to support this use case in a multithreaded system, and is also likely quite a performance burden due to the additional reference count manipulation.

For code that runs infrequently, the smart & weak pointer pair is a good option though. Without any smart or weak pointers the system would need to implement thread-safe API to register and deregister objects, and the systems would need to be tightly coupled (or perhaps use a message system).

If your system only infrequently dereferences pointers, is single threaded, or performance isn't an issue; the discussion's example of weak pointers with temporary smart pointers would be great for you.
9 comments:

Previous readers know about the Beautiful Pixels API game jam concept. I'm tickled whenever I see others with the same idea. Such as
Post It Shooter, an experimental game by Petri Purho:

A Space Invaders mini game rendered with a post it note style. ;) Well worth seeing it in motion... download or youtube video (it lessens the effect since it's a downsampled resolution, at least watch in HQ).
Frameranger, the winning demo at Assembly 2009 by CNDC, orange, & Fairlight: 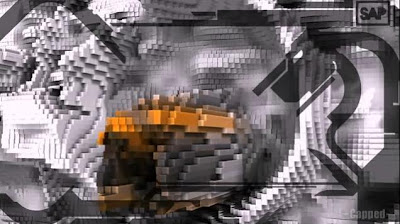 At 5 minutes in, there's a great shift to 8-bit music style and a block push pixelated render target. Check out the capped.tv video.
oh, demos... i love you, you make the most beautiful pixels.
1 comment: 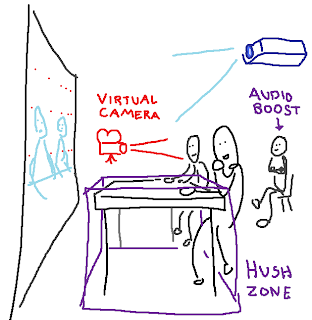 Paul Mecklenburg and I were chatting, and the thought of really cheap cell phone cameras led us to day dreaming about a teleconference system.

Line up a dense array of cheap CCD sensors and microphones into a video conferncing wall you're projecting onto. Now you've got a light field, which permits rich virtual camera re-imaging (movement, rotation, zooming, depth of field). The microphones can be used to triangulate sound sources. Sources from e.g. table locations can be dampened (see "hush zone" in picture). Sources distant from mics can have an audio boost to account for volume fall off (see "audio boost"). The speaking locations can also be used to drive an automatic virtual camera which focuses on subjects doing the speaking.
No comments: