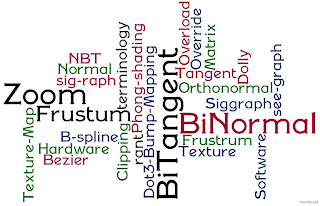 Yes, that’s right, this is a terminology rant!

Some mis-used terms just get to me… but posting on just BiNormal and Zoom wasn’t enough, so I invited some friends to add to the pile. ;) I got more responses than I anticipated. Several overlapped from multiple people, so here’s the list:

A BiNormal is defined in calculus as the cross product between a curve's Normal and Tangent. BiNormal is frequently misused in graphics when people need a basis to use on a 2D manifold surface. In that case, there is only one normal, but an infinite set of tangents. Normal mapping typically uses the tangents oriented by the u or v parameterization on the surface. NBTs are really “Normal, BiTangent, Tangent” sets.

Misused when people actually mean dolly in-out. They’re confused that “making something bigger on screen” means “zooming”. Zoom a change in the field of view of a camera (by changing the focal length). This is definitely different than dolly… and we’d have no Alfred Hitchcock’s Vertigo without them both!

I hear this all the time, and it does bug me: "we should run that on the hardware, using a pixel shader". So the GPU is "hardware"? What's the CPU, then? Corrupting the term is kind of pointless, so let's call it the GPU or the graphics accelerator or the graphics card or whatever, but save "hardware" to mean CPU or GPU (or all those other random electronic bits inside the box). The flip side is calling the CPU "software", as in, "well, we can't run it on a pixel shader, so we'll need to run it in software". The CPU and GPU are both controlled by software.

The most annoying one for me. Reviewers like to use it and so does production or upper management. What they really mean is geometry penetrations between characters and other characters or characters and world geometry/objects. It doesn't affect gameplay at all but Indy got docked major points for it by IGN and other reviewers.

Maybe they are referring to the graphic engine clipping the character by the geometry? Not sure, they never really explain it. They usually say the character clips into the world or something lame.

[Some] seem to refer to a sequence of Bezier segments as a "B-spline". You can convert one to the other, but that doesn't mean they're the same thing!

It's not bump mapping, it's normal mapping.

[People will say,] "Let's apply a texture map of a brick wall here", when what really should be said is simply "texture" instead of "texture map". The "map" part of "texture map" refers to the function used to transform a surface location in space to a location on the texture.

People generally mean override when referring to virtual functions in a subclass, but I routinely hear people use overload for that situation.

Thanks to contributors:
Dan Amerson
Bill Baxter
Kevin Christensen
Eric Haines (perhaps because he's an author of a book, he had a lot to offer. ;) more than I could use)

If you have your own favorites… comment away. ;) I’d love to hear them.